It seems that I have been spending a lot of time with Elmo and the gang on "the street" these days. I think it is pretty sad when I stop to realize that I would probably win at Jeopardy if there was a category for naming the monsters on Sesame Street and other random shows on playhouse Disney... at one time I thought how awesome I would seem to be able to spit out all this useless toddler trivia... now awesome is not exactly the word that comes to mind... But in true sesame style, this post is dedicated to the letter B.

B is for... Bed Bug.
Seriously, look at this girl! This is probably my favorite thing about being a little kid. You can sleep everywhere...even upside down and under the covers! Soak it up now Molly because once you have to share a bed with someone they no longer embrace diagonal sleeping. 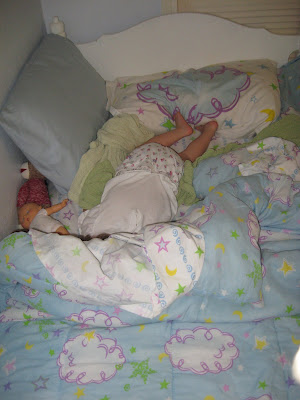 B is for... Baby land. Today was a new first to me. I watched my two children and my sister's 7 month old all day! Three kiddos under the age of two. It was BUSY but amazingly, really fun! I have to be honest- I was thinking I might be in a little over my head but everyone napped, ate, played and made it through the day! I thought it would be a baby deterrent but now... JUST KIDDING! 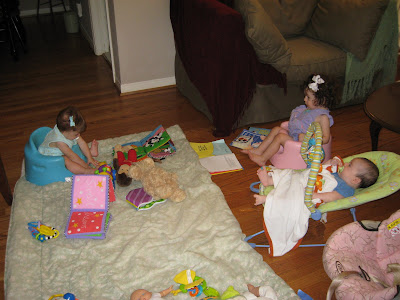 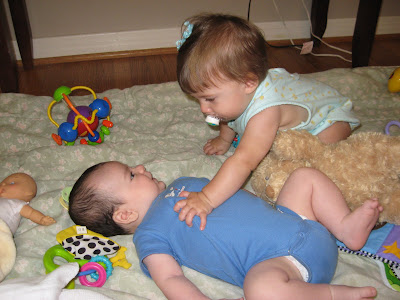 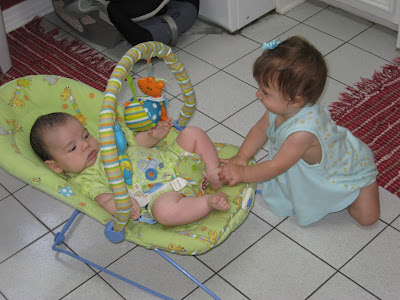 And finally B is for... BRAVERY.

now, there is no picture for this part because there was NO TIME and i was too busy being brave to think about it. For those of you that don't know this, sometime in my adult life I have developed this deathly fear of wasps and the sort. I mean, it is really sad. Never afflicted with this before college. hmm. Anyways, my typical reaction with a Wasp or Bee is to just run the other direction screaming at a level that only dogs can register. But not today. You see, being a mom has made me a little brave. Before when a vicious wasp flew in the house I would have moved. But not today. The two smallest were napping. I tricked Molly into thinking there was a surprise in her room. And I did it! I was going to smash the evil creature with my New Balance shoe but because of the angle and size of the wasp I began to envision everything that could happen if I missed. So, I created a master plan. Open the front door. Stand across the room and lift the blinds at the wasp poised on the window next to the front door. Throw a baby bottle at the window to get its attention. Have it chase me around the living room and out the front door. May sound a little silly. But it worked. So there, I was brave so that a nasty mean bug would leave my children alone. Hooray for being a mom ... it is the B-EST.

I love you and you are B-eautiful! I so proud of you bravery and I can't wait to see you this week! Tuesday?