...
Our Molly has had quite the week. She managed to come down with a wicked cold on Monday night and it literally took her a good 4 days to get it under control. She had one day of fever and several of lethargy---but a weeks worth of boogers. Ugh. We really did get lucky with it being such a cold week because it forced us to stay indoors and give her a little extra opportunity for some lazy at home healing.

By Thursday, she was ready for school.

Now, I have to first preface this and say that so far Molly is proving to have really strange allergies. When she was little, she had a skin reaction to the buttermilk ranch dip at Chick-fila. Just Chick-fila. Some spice in it maybe? When she was 18 months, we discovered that she had a beet allergy. Now, I don't just feed my children beets on a regular basis but many organic yogurts use beet extract for their red food coloring---- so unfortunately, no more red colored Stonyfield farms for Miss Molly. Yobaby is their only brand that doesn't use beet extract...but yokids does.

On Thursday, a stopped train in our neighborhood left me in a panic to get to the kids--- luckily, I wasn't the only parent a couple minutes late. Because I rushed in and rushed out to get the kids, it wasn't until I was home that I noticed that Molly had a fat little lip. An hour later... it looked like this. 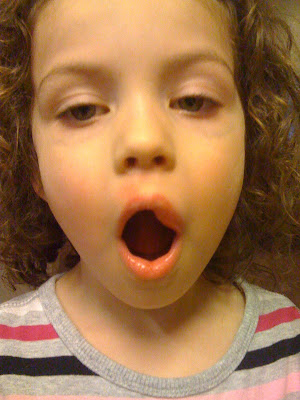 And yes, while I know this is a freaky picture it was the best I could do to get a good shot of it. I had to text it to Dr. Nonnie and Aunt Katy in Dallas to see what it was. Can you believe it that her lip continued to grow? By bedtime it was really sadtown big. I had asked Molly if she ate anything new at school today (I pack her lunch) and she said she just had grapes for snack. In my gut, I just knew it was a food allergy though. As I was putting Molly to bed in her benedryl-induced-near-coma, she started talking about these spicy skittles from school.

Or... to everyone else in the world, sour skittles. BINGO.

If you were to google sour skittles and allergies about 15 different links and a few images would pop up. Most of them with swollen little lips like our Molly girl. Weird, right? Turns out we can now add sodium benzoate to Molly's list of weirdo allergies. Anyone ever heard of this? So for the time being we will stay away from lemonheads, sour patch kids, sour skittles and the like... which is probably a good thing because if you are what you eat... than we better just stick with the sweet stuff.

Don't let her have Diet Coke then..