These shoes were made for walking.

...
Today may have been one of my favorite Gabey days. It was a big day in the small world of our little man as it was today that we bought him his official first pair of shoes. Now. I know that there might be a few gasps from our readers out there that yes, my son is one and has never worn shoes. Technically, he has worn shoes. Twice. For about 5 minutes. You see Gabe descends from a family of Hobbits and we don't so much like shoes. But, now that he has a big new trick (we'll get to that later) it seemed only fitting to splurge a little and get him a pair of shoes that might actually last on his feet for more than two seconds.
It was time to shop.
.
Now I have a really hard time justifying paying a lot of money for little baby shoes. Call me unfashionable- it is true, perhaps I am a bit more than cheap. It is just that I know my children and I know how dirty they are. It is really hard to tell myself that it is a good idea to pay more than what I would pay for my own pair of shoes--- remember the Hobbit reference? Not a huge fan of shoes. But, this time was a little different. I needed to find shoes that felt like socks (so they would pass the Gabe test) but also had grippers on the bottom of them. All signs were pointing to Robeez. Now, Molly was gifted with these shoes when she was smaller and we LOVED them. Me being cheap tried to stock up on the target knock offs and found that this is one of the few moments that a Target purchase did not bring me sheer joy. Let's just say that my breath after eating garlic all night smelled prettier than those bad boys after a day of wear. A gift card to Gap did help me justify my purchase a little. And they are really cute.
.
So, now to the best part of the day. While we were shopping for shoes Molly kept showing Gabe each and every pair they had. He had little interest. Until... Molly held up one pair and asked him if he liked them. He responded with joy, "Yah!" I thought that was really cute but then thought nothing more of it. We bought them and then went out to the bench to put them on. The minute they were on his feet Gabriel starts laughing. I mean the rolling kind of laughter. He kicked his feet in the air laughing the entire way to the car. Molly and I could not contain our laughter too. It was SO funny. I know that Gabriel was finally thanking his stars that his cheap parents had finally come into the world of fashion a little.
.
Here he is modeling his new purchase. 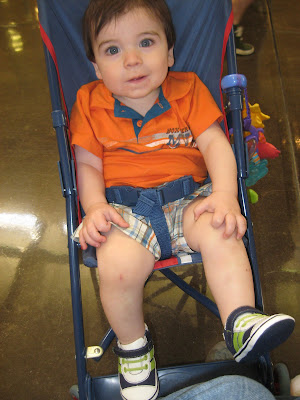 Gabe has worn his shoes all night and not once attempted to take them off. The grippers are great, especially since he is a full fledged walker now...
It is like he turned one and decided he was so over being a baby.
.
* I know the video is a little long... he is just so funny to film that I was having some difficulty with the whole cropping thing. Oh well.

Aww- Gabe is such a happy boy... AND he loves shoes. He's going to make some lucky lady very happy one of these days :)