...
Breakfast this morning was really exciting. In fact, Molly would probably go on to say that it was the MOST.EXCITING.EVER. Was it the awesome frozen waffles that I popped in the 'Hoster' this morning? While, Gabey was rather smitten with the syrupy delight, I would not deem it worth of most.exciting.ever status.

You see, waffles and Mommy were greatly trumped this morning by the return of an old friend. 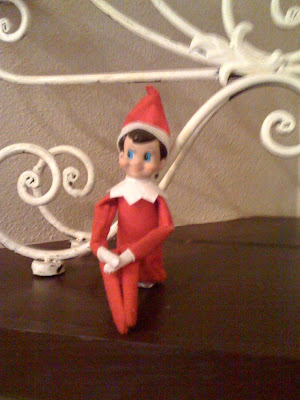 Henry is our elf on the shelf. This past holiday season with Henry was fantastic. Our children loved looking for Henry every morning and often times I would catch them whispering secrets (without touching!!) to Henry when I passed by. We were all a little sad when Henry returned to the North Pole. We knew though that we would see Henry again though because you see... Henry left a promise.

Right next to Santa's cookies was a letter left behind from Henry where he thanked Molly and Gabriel for all the holiday fun. He stated how much he enjoyed watching My little pony and Pinheas and Ferb in the morning. He also told Molly and Gabriel that he would return sometime in April to check in and meet Lucy once she arrived.

And today was that day. Definitely was a BEST.BREAKFAST.EVER. sort of magical morning with Henry. Have I mentioned how much fun it is to have small children?