...
I have to tell you that I really don't feel that panicked about this packing process... perhaps because I am in denial that it is now moving week- who knows. I'll take it. It seems that we have a pretty good plan for this week and have even made to-do lists for each day before we move... and yes, the lists are for my sanity alone.
The plan we had created seemed quite doable...until tonight.. You see, one member of the family decided to veto the plan and throw in his own little change-up this evening. Tonight when I laid Gabriel down to sleep he really wanted to sleep with this tow mater truck that dances. I informed him that he would have to wait and play with it in the morning. Apparently, this was the wrong answer. About 6 minutes after I walked out of his room, Kelly and I hear this horrifically loud, all-to-telling THUD.
It seems that Gabriel REALLY wanted that truck and took this moment as an opportunity to climb out of his crib for the first time. Now. Please know that we know he is plenty old to be in a big boy bed. It's just that we are moving in 7 days and Molly is sleeping in his new bed. She won't move to her full size bed until we move... so we were trying to hold off one week. Apparently, one week too long for Gabriel.
Kelly and I instantly sprinted to his room and found him doing that horrible... "I am so hurt and about to cry so hard but for right now I am just going to not breathe cry." Those parents out there know what I am talking about. And it is horrible. I pick Gabriel off the hardwoods and his mouth is pouring blood... so much that I don't even notice the HUGE goose egg forming on the top of his head. One purple Popsicle later we see that he has not bitten through his tongue... just taken a little chunk out of it. At this point we see the bump. Apparently, he fell directly on the top of his head from his crib and bit his tongue when he hit the floor. So.... I need you to remember that I work with patients recovering from traumatic brain injury. This is my trigger. The reason for my crazy helmet wearing rules. No WAY was he going to sleep in his crib a second longer.
So yes, tonight was NOT spent packing. It was spent coverting Gabriel's crib to a toddler bed instead... for 6 nights. I made Gabriel stay up an hour an half later to make sure he didn't have a concussion and then woke him up again an hour after sleeping... all I have to say is that he is a HARD sleeper... and luckily, has a very hard skull too. Whew. 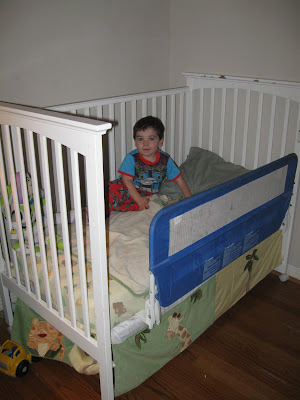 He doesn't seem unhappy one bit. I am sure at this point he is just thinking about how awesome it will be to play with his Thomas trains at 3 in the morning.

Oh Gabey, you keep us hoppin'.

Oh my gosh!!!! I have nightmares about Cole climbing out of his bed...and onto hardwood, I can't even imagine!! Hope he's ok and good luck packing! :)