I wanna know where the gold's at...

...
On Saturday, the Irish crew and one Frenchman headed out for some good ole' parade watching. It was so much fun this year...and incredibly cold! A little shiver couldn't take the bounce from our step and it was nothing a nice blue moon couldn't fix (for the over 21 crowd :) 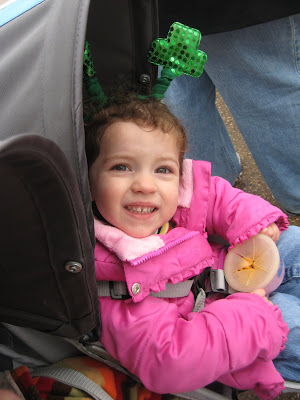 I promise they were wearing lots of green-just no way to tell under the winter apparel. 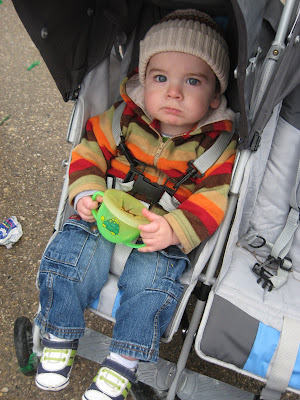 This kids quickly lost their comfy spots to the beer. I told Kelly that I was going to let my beer sit for a minute to cool it a little more. Also, make sure to notice Kelly's superior catch. Sure it may just be a SMU shirt...sorry dad... I mean an AWESOME SMU shirt. Who knew that a shirt could cause such pandemonium in a mob of green? 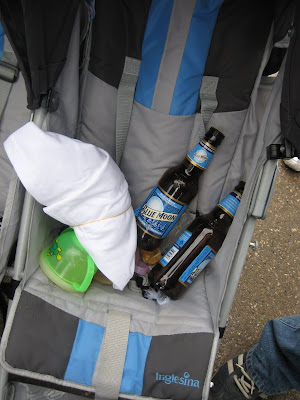 Molly LOVED it when all the Chloes were out walking! She kept telling me "There's Chloe...and Chloe again... and Chloe again..." Our other favorite float was the 'shake your shamrock' float. Apparently, Molly and Gabe both thought they had the best dancing music. Uncle Nick had called us to look for the Alabama Leprechaun float but I missed it due to toddler potty time. 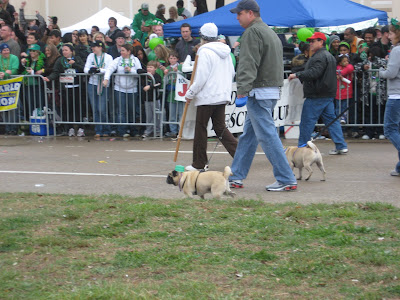 Gabriel and Kelly had some great bonding time. They shared some love... 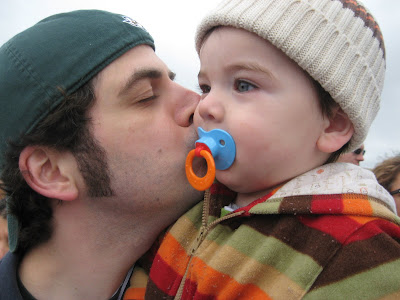 and some delicious beads... 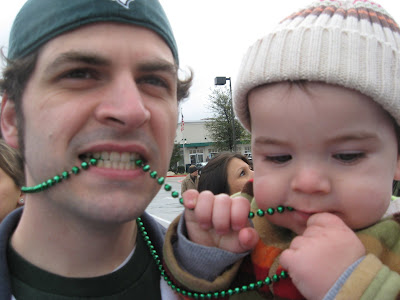 What better way to celebrate an end to a parade then some green and white Krispy Kreme's? 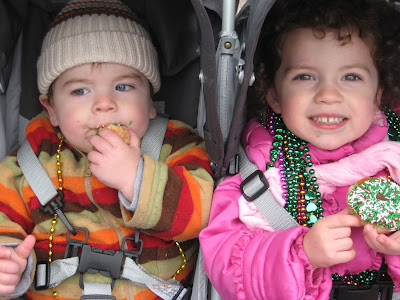 Now for the most important part. Saturday, I learned an amazing secret. Molly just might be my get out of jail free card. It was unreal. Let me explain. I am still in such a state of shock that I have yet to find the words. Molly was just standing at the rail looking at the floats and drunken debauchery happen right in front of her. Like this... She was loving it but was really quiet and just soaking it all in. As the floats were approaching I turned to Kelly and casually remarked that Molly was probably going to get pelted with beads. I am not kidding that the first bead thrown in our area bounces directly off the pole at her head and lands right at her feet. That kid is a magnet. And then it really began. People would get off the floats to bring her beads. WHAT? Molly was making out like a bandit.
.
She had to go to the bathroom and we approached Krispy Kreme. I know that I have a tendency to over exaggerate. Please know, that this is NOT one of those times. That line was easily 30 deep. It was filled with crazy green drunk people. We took our place at the back. Molly turns to drunk man A and informed him that she had to go tee tee a lot. Brilliant Molly, brilliant. At this point that Drunk Man A starts chanting 'Let her through'. Before I know it this catches on. I kid you not it was like the parting of the seas. On our way to the bathroom people were putting more beads on her... what? When we came out of the bathroom the line burst into cheers/clapping and Molly informed them that "She did it!!" more cheers...more beads. Not normal. Oh the power of the cuteness card...at this exact moment I suddenly saw all the ways that I can benefit from this. Goodbye bathroom lines, hello upgrades.
.
Here Molly is showing off half of her loot at home. She had too many to fit all around her neck. 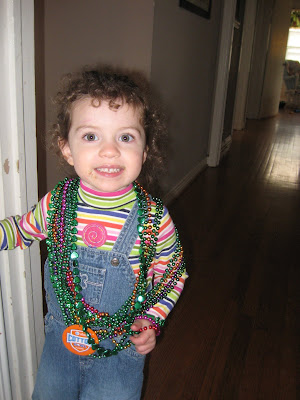 This is the funniest thing I have heard in a LONG time!! Haha!

I'm so sad that we missed the pug float :(